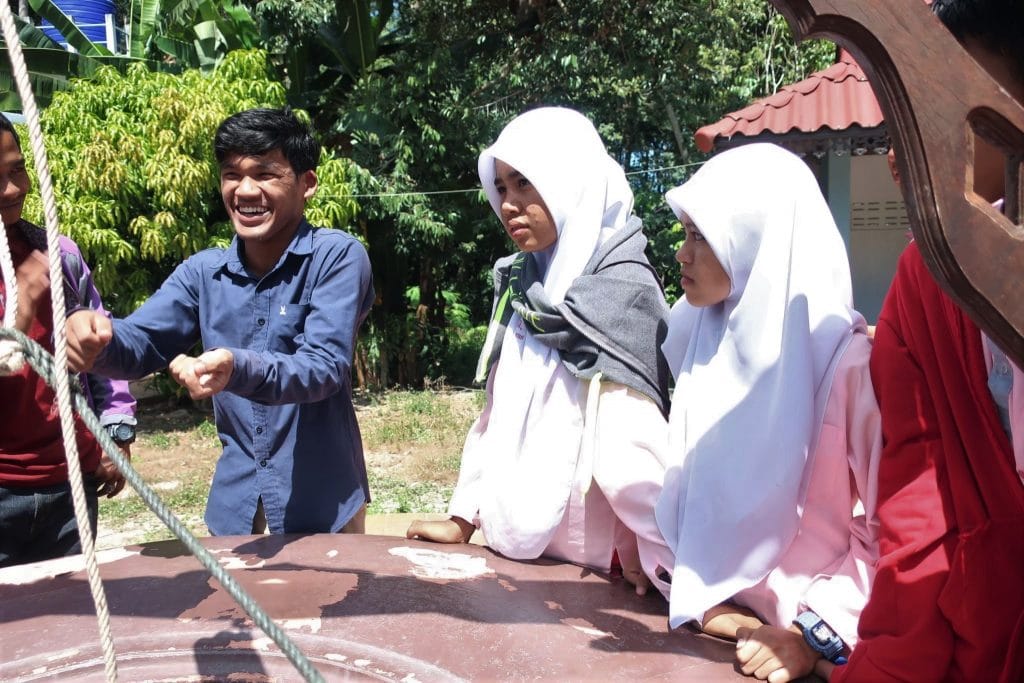 More than 7,000 lives have been lost to the ongoing conflict in Thailand’s Deep South since 2004. Tensions between neighboring Muslims and Buddhists continue hindering attempts at community-building, fundamental to achieving lasting peace in the region.

Mr. Saidee Pradu is one of the many Thais whose life has been shaped by the ongoing unrest in the Deep South. Born and raised in an exclusive Muslim community, Saidee had few opportunities to interact with people from different religious backgrounds. From the time he was young, Saidee acquired all of his news through the internet, further isolating him from different perspectives. With no other viewpoints than his own, Saidee’s commitment demanding justice for Muslims around the world was reinforced. Positive change came for Saidee when, at twelve years old, he was selected to be a youth leader in the USAID-funded HOPE Pattani project, the earlier phase of the USAID Chumchon Harapan project implemented by Kenan Foundation Asia, which is championing People-to-People (P2P) engagement for greater social cohesion in Thailand’s Deep South. Through HOPE Pattani, Saidee became friends with people from different religious backgrounds. Learning new skills, he brought disparate members of his community together, whilst acting as a positive role model for tolerance and acceptance. Using open, inclusive communication, he shared with friends his beliefs while also learning about others’ faith and convictions.

Organized by Kenan Foundation Asia in collaboration with local institutions, the HOPE Pattani project offers youth leaders such as Saidee weekly training at school, community activities, and forums to express varying ideas and dialogue from religious backgrounds. With the support of the Hope Pattani project, school principals, teachers, and other community members, Saidee realized that peaceful communication is far more powerful than anger and violence. Appreciating the monumental and sustainable change he and other youth leaders created, Saidee continues applying conflict-management techniques to his daily life, sharing them with those around him. Joining HOPE Pattani in 2013, Saidee’s life trajectory transformed from becoming an intransigent youth to an open-minded adult.

The success of the HOPE Pattani program for Saidee and the communities of the Deep South is evidenced through the many local and international initiatives he has since organized. In 2015, Saidee coordinated a series of charity drives to support Rohingya refugees, including fundraising campaigns to provide food and financial assistance to the refugees. The following year, he ran a number of local community development projects, including the successful implementation of a drug prevention program, which featured youth workshops and outreach in the community to raise awareness about drug use. In 2017, Saidee was elected as president of the Pattani Children and Youth Council. He used this new role to reach out to a diverse pool of young people at both district and provincial levels, promoting cultural harmony and unity through various activities.

Today, as a university student with a solid academic record, Saidee proudly continues his work as a community leader. Reflecting on his experience in the HOPE Pattani project, Saidee says that as a child he had little faith in the effectiveness of similar programs focused on community and youth development. However, he came to see just how important initiatives like HOPE Pattani are. Through self-empowerment, participation in development projects, and fostering change in his community through the use of creative and positive communication, change can happen. Launching a student volunteer group in the Sanor community, Pattani province;  activities such as garbage collection, traffic management, assisting constructive religious gatherings, and arranging religious lectures for young people on how to avoid drug use were established.

Saidee knows HOPE Pattani can change the lives of young people and those in Thailand’s Deep South communities for the better. He believes that through Kenan’s ongoing work in the region with USAID support, the change will continue to happen. “Getting young people involved is not difficult,” says Saidee. “We just need to give them a chance to understand their potential and give them a small reward to encourage them to work consistently.”

“I am very proud to be part of HOPE Pattani; to have activities for our community and our society. I want to give a big thanks to the HOPE Pattani project that empowered me, changed my attitude towards life, and helped push me forward.”