More than 7,000 lives have been lost to the ongoing conflict in Thailand’s Deep South, where tensions between minority-ethnic Muslims and their Buddhist neighbors continue to create conflict, whilst hindering attempts at community-building fundamental to achieving lasting peace in the region. 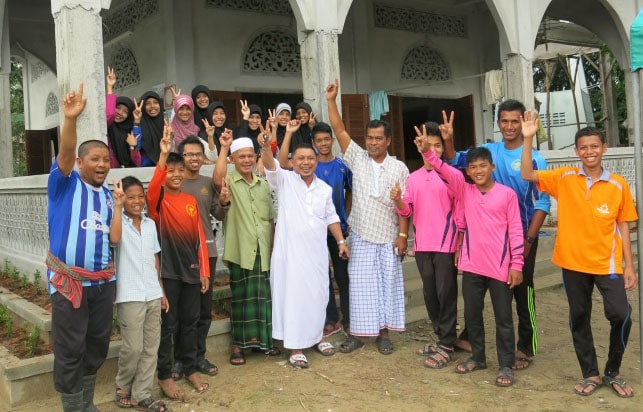 Education as a powerful tool for the promotion of peace

Mr. Saidee Pradu is one of the many Thai citizens whose life has been shaped by unrest in the south. Born and raised in an exclusively Muslim community, Saidee had few opportunities to interact with people from other backgrounds growing up. As a youngster, he acquired all of his news through the internet, which further isolated him from perspectives different to his own. When he heard stories of religious conflict, Saidee’s intolerance for other communities was reinforced, to the point at which – still just a child – Saidee declared he was ready to take up arms to demand justice for Muslims around the world. Positive change finally came for Saidee when, at twelve years old, he was selected to be a youth leader in the USAID-funded HOPE Pattani project, which has championed people-to-people engagement for greater social cohesion in Thailand’s Deep South for the past nine years. Through HOPE Pattani, Saidee made friends with people from different religious backgrounds for the first time in his life. He also learned a set of new skills with which he could bring disparate members of his community together, whilst acting as a positive role model for tolerance and reform. Using open, inclusive communication techniques, he helped to educate non-Muslim friends on the culture and beliefs of Islam.

Organized by Kenan Foundation Asia in collaboration with local institutions, the HOPE Pattani project offered youth leaders like Saidee weekly training at school, community activies, and online and offline forums through which youngsters from different religious backgrounds can share their ideas. Since joining HOPE Pattani in 2013, this structure has formed the backbone of Saidee’s transformation from intransigent youth to open-minded adult.

Supported by the HOPE team, as well as school principals, teachers, and other community members, Saidee realized that peaceful communication is a far more powerful tool than either anger or violence. He saw that with it he and other youth leaders could solve problems within their communities and create long-lasting, sustainable change. Saidee continues to apply conflict-managament techniques acquired through the program to his daily life, and shares them with those around him.

The success of the HOPE Pattani program for both Saidee and the communities of the Deep South is evidenced through the many local and international initiatives he has since organized. In 2015, Saidee coordinated a series of charity drives to support Rohingya refugees. The following year, he ran a number of local community development projects, including the successful implementation of a drug prevention program, with the help of traditionally-disparate members of his community. Then, in 2017, Saidee was elected as president of the Pattani Children and Youth Council. He used this new role to reach out to a diverse pool of young people, at both district and provincial levels, and with them host activities aimed at promoting cultural harmony and democracy.

Today, as a junior university student with a solid academic record, Saidee proudly continues his work as a community leader. Reflecting on his experience in the HOPE Pattani project, Saidee says that as a child he had held little faith in the effectiveness of such programs. Gladly, however, he came to see just how important initiatives like HOPE Pattani are, and through participation in developmental projects was empowered to foster change in his community through the use of creative and positive communication techniques. Following his involvement with the program, Saidee established a student volunteer group in the Sanor community for activities such as garbage collection, traffic management, assisting constructive religious gatherings, and arranging religious lectures for young people on how to avoid drug use.

Saidee knows first-hand how programs like HOPE Pattani can change the lives of young people and those in Thailand’s Deep South communities for the better. He believes that through Kenan’s ongoing work in the region, this will continue to do so for many others yet to come. “Getting young people involved is not difficult,” says Saidee. “We just need to give them a chance to understand their potential and give them a small reward to encourage them to work consistently.”

“I am very proud to be a part of HOPE; to have activities for our community and our society. I want to give a big thanks to all of you that have changed my attitude towards life and helped push me forward.”