The bank came knocking on Ms. Somsri Khamsri’s door with a short message – her house was now theirs. After receiving the jarring news, Ms. Somsri was forced to move into Bangkok’s low-income Klong Ladpachee community, where her problems only worsened. 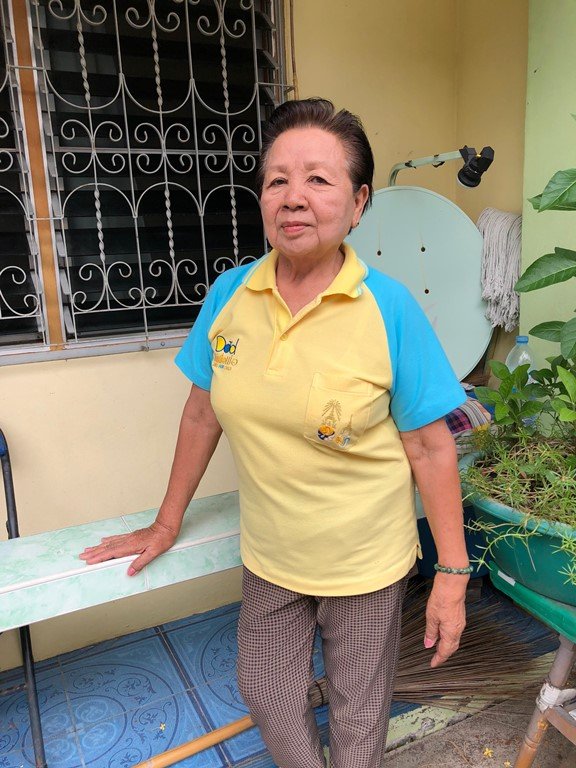 As a retired housewife, Ms. Somsri had no employment opportunities and had to get by on the government’s small senior citizen allowance and support from her children, totaling about $300 a month. The amount, however, was not enough to cover rent, food and other basic living expenses, and so Ms. Somsri fell prey to the predatory lenders waiting at every turn to supply cash with exorbitant interest rates (as much as 120% per year).

Loan sharks were ever-present when Ms. Somsri moved to Klong Ladpachee, and posed problems to not only her but the community as a whole. “The loan sharks were always standing in front of the local bazaar. They would wait for debtors to come in and were always looking to acquire new customers,” Ms. Somsri reflected. “This environment really hurt us, and we began to feel devastated for being born poor.”

Worse yet, the loan sharks began to threaten the safety and mental wellbeing of residents. Looking back on those difficult times, Ms. Somsri said that “life with debt is bad, but it is even worse when we are hopeless to find a safe living space.”

As Ms. Somsri’s debt piled higher and higher, she admitted that she developed some bad habits that contributed to her already dangerous situation. Playing the lottery, for example, became her self-prescribed medicine to ease the stress caused by the mounting debt.

When it seemed as if she may never escape her debt spiral, a ray of hope, in the form of Kenan’s Citi Financial Skills Building for a Secure Financial Future project (funded through a grant from the Citi Foundation as part of its efforts to help low-income adults adopt positive financial behaviors and accumulate and preserve financial assets) entered her community. Through Kenan’s engaging, hands-on training that provides practical financial literacy knowledge tailored to the circumstances of low-income communities, Ms. Somsri began to understand the power of saving and planning for the future. Ms. Somsri, most importantly, put the knowledge into action, a decision that transformed her life for the better.

She immediately started cutting down on unnecessary costs, starting with the lottery. “Prior to the project, I spent about 500 baht twice a month for the lottery and never realized that the value could pile up to become thousands of baht by the end of the year.”

Ms. Somsri didn’t stop with avoiding the lottery. She examined all aspects of her life and found ways to save wherever possible. Her newfound commitment to smart financial decision making had far-reaching effects on her life as well as her finances. “Even for the food, I spent about one thousand baht a week because I bought so much,” Ms. Somsri explained. “I ate a lot and became unhealthy, which meant I had to spend more and more money to see the doctor and buy medicine.” By buying less food, she lost weight and improved her health. Consequently, she no longer has to make so many costly visits to the doctor.

Today, Ms. Somsri’s life looks very different than when Kenan’s project began in early 2017. She has found a part-time job making souvenirs for a small business in her community and now saves 25% of her monthly income. She has climbed out from the seemingly endless mountain of debt and has accumulated 50,000 baht in savings.

As more and more people in Klong Ladpachee have adopted the financial skills from Kenan’s training, the loan sharks have disappeared. “Believe me, the bloody loan shark are gone now,” Ms. Somsri delighted. “They no longer hang out in our community. We are safe and happy now.”

Since getting her life in order, Ms. Somsri has set her sights on a new goal: helping others escape debt, a situation that afflicts far too many people in Thailand. “Though financial literacy for many in Thailand is low, we Thai people always see others as our friends, and we want to help them and see them overcome their barriers,” said Ms. Somsri beaming with happiness and pride as she pondered how she could help her neighbors experience the financial freedom she now enjoys.

Any cookies that may not be particularly necessary for the website to function and is used specifically to collect user personal data via analytics, ads, other embedded contents are termed as non-necessary cookies. It is mandatory to procure user consent prior to running these cookies on your website.