While the proportion of women to men enrolled in higher education worldwide continues to trend toward balance, women still make up only 30% of the global STEM research workforce. In Asia, those numbers drop even lower, especially in the hard science fields like mathematics, engineering, and software development. Only 16% of the countries in Asia have an equal or above-equal proportion of women working in STEM-related fields.

These figures, based on a recent study by UNESCO’s Asia and Pacific regional bureau, confirm that gender differences in education and learning achievement continue to contribute to the low number of women represented in STEM-based careers in Asia. 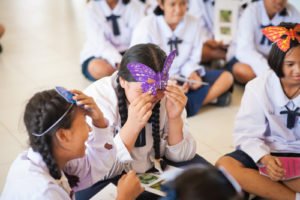 The report, A Complex Formula: Girls and Women in Science, Technology, Engineering and Mathematics in Asia, looked at case studies from Cambodia, Indonesia, Malaysia, Mongolia, Nepal, South Korea, and Vietnam. It determined a complex set of factors that can inhibit girls from pursuing further STEM education. These ranged from social issues, such as anxiety, to a lack of female STEM role models, to learning materials and lesson plans that can actually worsen gender stereotypes.

Gender disparities in STEM-related fields across Asia were greatest in the hard sciences, such as computer science, physics, and engineering. By contrast, women were much more likely to study and pursue careers in the life sciences, like chemistry, biology, and medicine. These differences may reflect the social and labor force trends in countries where the hard sciences have long been traditionally male-dominated fields.

Additionally, the UNESCO study found that as education levels increased, the percentage of women studying STEM-related subjects dropped. In other words, the proportion of women receiving Master’s degrees in STEM-related fields was far lower than those receiving Bachelor’s degrees. As the report puts it, “female participation in STEM fields in higher education varies by country, with females often concentrated in certain disciplines, and their participation falling as the level of education increases.”

This trend continued in the workplace, where women held a statistically non-proportional number of senior STEM-related positions. Even looking simply at the number of Nobel Laureates in STEM fields is illustrative. “Out of 199 laureates in Physics, 169 in Chemistry, and 207 in Medicine, there were only two female laureates in physics, four in chemistry, and 11 in medicine between 1901 and 2014 (Nobelprize.org, 2014).”

The report also developed a number of recommendations for increasing women’s representation in STEM-related fields throughout Asia.  In particular, it calls for gender-responsive education and labor policies from governments, gender-responsive teaching strategies, scholarship programs, and improved support programs and initiatives for female STEM professionals.

Noting that there were also a number of positive signs, such as the shrinking gender gap in learning achievement in math and science, the study concludes that, “if women are to stand alongside men as equal contributors to the building of just, peaceful and prosperous societies, they must be ensured the equal opportunity to learn in all areas, including STEM.”