Loud whispers emanate from a small group of teachers huddled in the back of the auditorium. After a few moments of hurried discussion, the huddle opens up, and Visut, the team’s spokesperson, steps out and faces a man standing idly near the entranceway.

The man jolts to attention and marches forward like a soldier on patrol as some 50 teachers count in unison, “one…two…three…four…five.”

The pattern continues as Visut and his team strategize and direct the man through the maze of tables and chairs until he happens upon the hidden prize, a cuddly pink bear, stowed in the far corner of the auditorium.

Teaching 4th-9th graders at an educational opportunity expansion school (a school that caters to the needs of poor kids in rural Thailand) how to code isn’t easy. Visut, who is in his second year of teaching computer science at Wat Chorakhe Yai School in rural Samut Prakan, knows this as well as anyone.

Few of his kids, after all, have access to the computers and technology that many of us take for granted. Coding languages, moreover, are written in English, and most of his kids are not proficient or comfortable using English. These obstacles are very real, but that doesn’t mean that the technological progress shaping these kids’ future will wait for them. 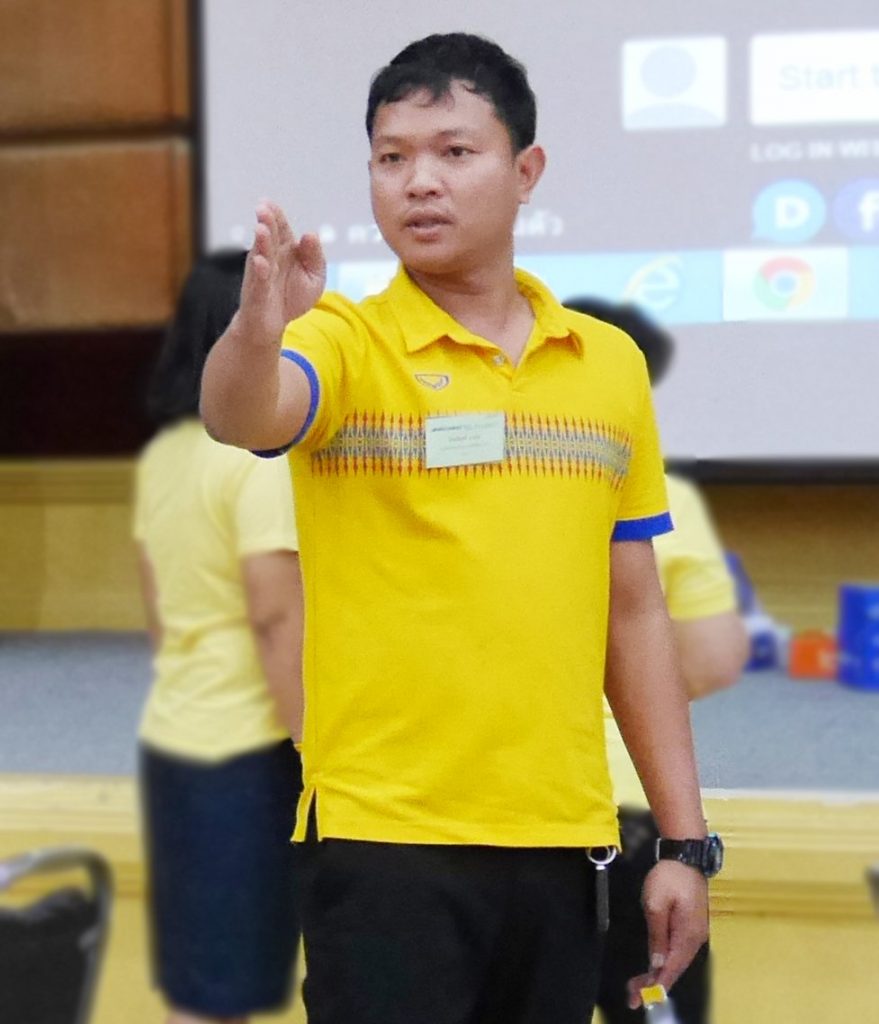 Visut’s challenge is clear: he needs to provide a 21st century computer science education to kids who have few resources and little experience using technology. When he began teaching, Visut did what you would expect – he taught his kids the way he had been taught, meaning he read from a book and assigned coding tasks. The results of this passive learning approach weren’t surprising – his kids were confused and afraid.

Passionate about technology and committed to helping kids explore its wonders, Visut knew he must improve his teaching practices, and so he gave up three valuable vacation days to attend a Boeing Technology Enhanced Learning (TEL) teacher training in Pathum Thani. At the training, Kenan introduced its Enhanced Project-based Learning (E-PBL) model and a series of computational thinking exercises, which caused Visut to scrutinize his current methods of teaching.

Computer science and coding, Visut learned, is a process of thinking and problem solving more than the ability to mash together a jumble of text, symbols, and characters in just the right order. The latter can be memorized; the former is more abstract but fundamentally more valuable to kids’ real lives and future, whether they choose to pursue a technology career or not.

When we think about computer science education, we picture rows of silent students hunched in front of monitors and busily pecking away at their keyboards. But this isn’t how it has to be. Group-based activities like those introduced at Kenan’s training break down the walls between students, allowing kids of any background to solve problems collaboratively and have fun while learning foundational computational thinking concepts.

For example, in the pink bear activity, kids must analyze the situation, use decomposition to divide problems into smaller, more manageable steps, and, ultimately, design a set of instructions to direct the person to the bear. In reality, the directions are an algorithm, similar to the “directions” a coder puts into JavaScript or C++ to program software.

“I used to think that computer science was the same as other subjects where you use a textbook to teach concepts. But after I joined the project, my mindset changed,” said Visut. “There are many ways to teach computer science, we don’t have to teach coding from books, and we don’t even need a computer or English.”

From the Classroom to the Real World

Technology affects all aspects of the modern world, and its importance only will grow in the decades to come. The Thai education system needs to keep up with such rapid change, but that doesn’t mean asking students to memorize long strings of code – it means instead that we need quality teachers who build kids’ 21st century skills (communication, creativity, collaboration, and critical thinking) in the context of science, technology, engineering, and math (STEM) education. With these skills and knowledge, kids, whether in Bangkok or rural Thailand, will be capable of harnessing the power of modern technology.

By ending rote learning in favor of hands-on, high-impact practices, Visut is doing just that, building his kids’ knowledge, 21st century skills, and confidence to apply STEM to the real world, and enabling them to discover their latent talents and succeed in life.
————————————————————
Visit our new webpage to learn more about our work to transform education in Thailand.