Denisa steps confidently to the elevated stage, microphone in hand. Sandwiched between two celebratory bouquets, Denisa describes the purpose of her invention—a meter-long, sky blue pipe with an odd, claw-like contraption at one end. Before a panel of judges, teachers, and scores of fellow students, Denisa describes how this ordinary object has transformed the rubbish-filled canal surrounding her school into a point of pride among classmates, staff, and community members.

Shortly after her school joined a Kenan education program that introduced Enhanced Project-based Learning (E-PBL) into disadvantaged middle schools in Ayutthaya province, Denisa and her teammates set out to tackle an enduring irritant: the canal adjacent to school that resembled a garbage dump more than a waterway. Watching the trash float lazily down the canal had long been an eyesore on the grounds surrounding Watsukantaram (Sukantawittayakan) School for staff and students alike. The problem was that the canal was too wide for an individual to clean by hand without getting submerged into the water and the maintenance staff’s metal poles were rusty and inefficient. Alas, trash found a home in the canal. 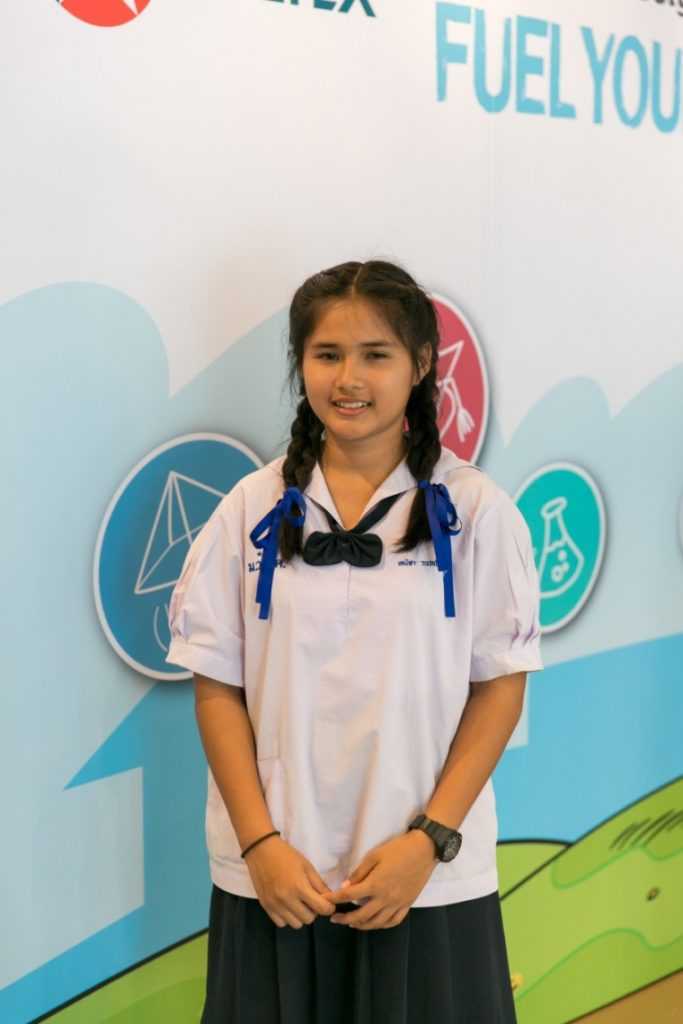 Under the program, called Caltex Fuel-Your-School, Kenan trained teachers on the E-PBL methodology, which they then used to guide students through STEM projects that addressed community problems. Unshackled by the constraints of a mundane classroom, creative kids do extraordinary things. In the case of Denisa, her group knew the problem they wanted to address, but didn’t know how to do so. Her teacher encouraged them to use the scientific method to observe the world around them to make educated hypotheses for solutions to the canal’s mess.

Denisa discovered her group’s solution not by looking down at the water, but rather up at the trees. “I noticed our school gardener using long sheers to reach up and snip tall branches that were out of reach,” explained Denisa. “I thought we could borrow the design and apply it to collecting garbage that is far out in the canal.”

With an idea in mind, Denisa followed her teacher’s advice of using the scientific method to test her hypothesis. After creating prototypes and much trial and error, Denisa and her teammates constructed a device that was up to the task. The simple, yet brilliant tool used only a long PVC pipe with a bicycle brake on one end connected by a wire to the claw-like structure on the other end. When you clamp down on the brake, the claw closes and snatches up out-of-reach debris.

Because of Denisa’s device, the once unsightly canal is now an asset to the school’s environment, much to the delight of all those who walk by it on a daily basis. During the Caltex Fuel-Your-School Competition Day, Denisa presented the tool and its impact in front of a packed auditorium. Dazzled by the contraption, the judges bestowed second place honors on Denisa’s team.

Though proud of the award, Denisa feels even more excited about the eye-opening experience that arose from being a part of Kenan’s E-PBL program. In Thailand, rote memorization and teacher-centered classrooms have sapped the enthusiasm for learning out of too many students. Departing from the norm, Kenan’s work showed Denisa, her peers, and teachers the power of a transformative STEM education and student-centered learning.

“This project allowed me to think outside the box and use a hands-on approach to create something useful. It really inspired me.”