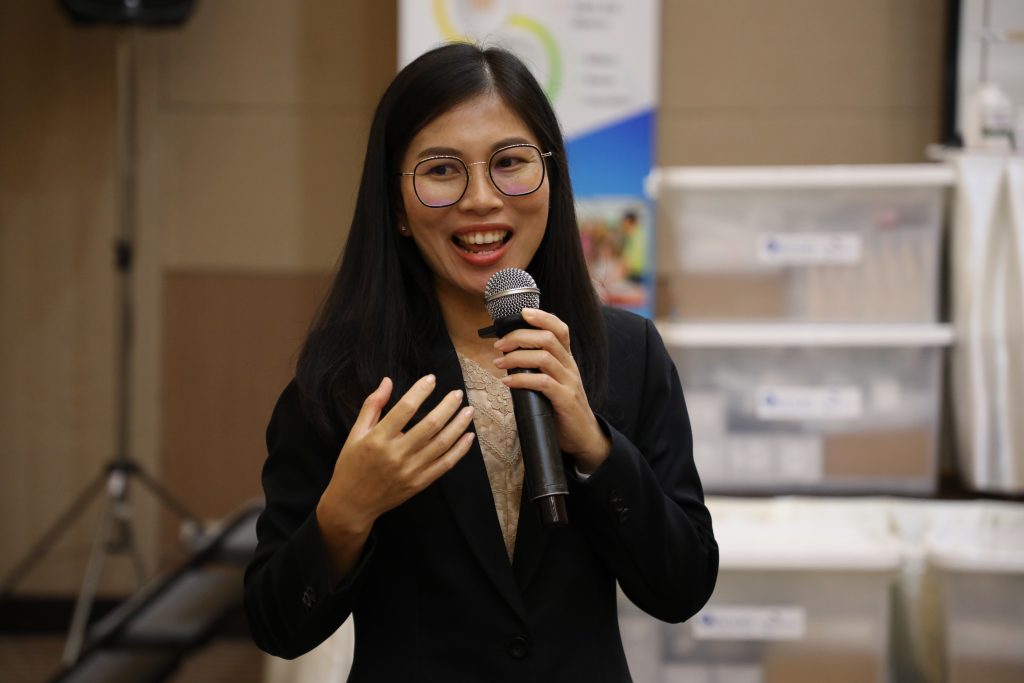 Walaluck Srilakram, or as her students know her, Kru Ik, has loved chemistry her whole life. Her passion for science and in particular, chemistry, has deep roots and goes back to her childhood.

“I love to observe and learn new things,” said Kru Ik. “I like to see changes, colors changing for instance, and to learn about things that are invisible or very small and explain these phenomena to others.”

Kru Ik has been explaining these natural phenomena to students in her chemistry class for 11 years now, at Banja Suksa school in Khon Kaen province.

But her chemistry classroom today is a bit different: it’s full of 31 fellow teachers. That’s because Kru Ik is what’s called a ‘master trainer’, and today she will impart her science teaching prowess – plus a bundle of other teaching tips and tricks – to help her peers absorb high-impact teaching practices that will help engage their students in more interactive, inquiry-based learning.

To do this, Kru Ik is modeling a classic chemistry experiment on properties of matter. Her students-for-the-day are all teachers from Rayong province, where the IVL Foundation, an arm of Indorama Ventures Public Company Limited, has partnered with Kenan Foundation Asia to support a campaign to strengthen science teaching and learning. The teachers are split into teams of four or five and share a set of beakers and burners, which they will use to heat various liquid solutions and observe the changes.

Like many master trainers, Kru Ik first became involved with Kenan when she had just begun teaching, after attending a similar skill-building workshop.

“My sister used to join the Kenan program before me,” said Kru Ik. “I saw that she attended a workshop with her team and other teachers from different parts of the country, and I wanted to have the opportunity to participate in the same program as her.”

After attending the training, Kru Ik found that the practices she was learning – like encouraging classroom discussion and fostering collaborative group work – made her classroom a more dynamic environment.

“I noticed that the students gained confidence in their speaking and presenting,” said Kru Ik. “They exchanged knowledge and discussed more in class than in the past.”

In many Thai schools, students are accustomed to memorizing formulas and reciting rote answers to questions. This leads them to internalize a fear of getting the wrong answer or saying the wrong thing in front of their classmates.

“Often students won’t dare to answer questions or speak in class,” Kru Ik says. “When they ask me after class, that’s when I know they didn’t understand what I taught in class.”

With her increased confidence and skills, Kru Ik was able to transform her classroom. But equally important was the upgraded science equipment she received, which allowed her to design new experiments and make sure groups were small enough that students could engage with the materials.

“If we divide the students to fewer members in each group and everyone can use the equipment, it affects their studies a lot,” Kru Ik said.

With the generous support of IVL Foundation, teachers in Rayong are now stepping up their science classrooms using cutting-edge chemistry materials. But even more importantly, they’ve gained the skills that come from the kind of collaborative, high-quality professional development that proved so effective for Kru Ik.

“I’ve had a chance to meet teachers in every part of the country,” said Kru Ik. “If you ask me what it takes to be a master teacher, the first thing is friendship with the lecturer team and Kenan team. We are very close because we meet each other a lot and work together. We think and share experiences together.”