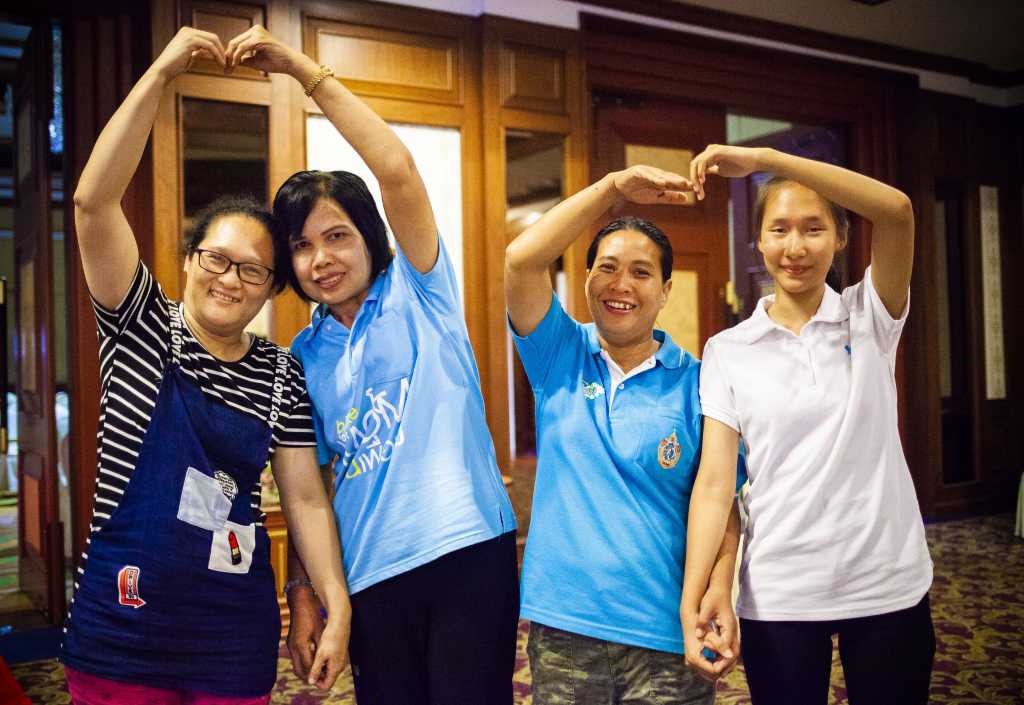 On the fifth of August, revenue from sewing was 300 Baht (9 USD). In the rows of expenses for the entire month, a single check mark adorned the column for unnecessary expenditures, captioned: “Clothes for children.”

Over several months, the 56-year-old seamstress led a team of four community members from the Fahmai Community Baan Mankong Housing Cooperative in Bangkok to victory in a financial literacy program. Gathered excitedly on a couch after receiving their prize, Praphasri leaned forward on the cushion as she recounted the team’s winding journey.

“I had to leave school after the fourth grade,” she explains. Despite having worked since a young age to support her family, Praphasri is one of a multitude of Thai workers whose low and inconsistent wages position them in a constant state of precarity between the fluctuating margin of income and expenses.

“All my life, I didn’t have savings,” said Praphasri. “Sometimes I couldn’t pay the electricity or water bill of 1,000 Baht (30 USD) per month, so I would have to borrow from a loan shark.” Afterward, the loan sharks would come to Praphasri’s door every day for a month to collect money. In low-income communities, access to formal financial services is often difficult; loan sharks dominate the informal financial service sector and typically charge interest of 20 percent a month (240% a year). With few safety nets to fall back on, low-income communities are particularly at-risk for high household debt.

Household debt is a national problem due to a continued lack of individual financial knowledge, as well as macroeconomic factors including a rising cost of living outstripping wage growth. This year, the University of the Thai Chamber of Commerce (UTCC) found that low-income workers’ household debts have reached a 10-year high, with 96 percent of the 1,194 low-income workers surveyed holding some kind of debt. Workers’ household debts rose 4.95 percent from last year to an average of 137,000 baht per household in 2018, with nearly one-third of loans occurring outside of the formal financial sector.

Praphasri began to wonder how she could escape these cycles of debt and worry. “In the factory, even though I have exceptional sewing skills, I can’t get a higher wage,” noted Praphasri. Although Praphasri could not find an easy way to increase her earnings, at least she could learn to manage her money so that it would be less of a constant stress in her life. “I believe that knowledge is the most important thing,” said Praphasri.

It was in this context that Kenan Foundation Asia launched a financial literacy program for low-income communities, with curriculum tailored to their financial realities. The project targets those who earn between 5,000 and 15,000 Baht ($150 and $450) a month, recruiting heavily in communities like Praphasri’s. The program aims at equipping low-income people with the mindset and process knowledge with which to set their own targets and build new habits toward their goals.

Funded by Citi Foundation, the workshops are offered free-of-charge to participants in the 40 communities in which it operated this year. With expertise in financial goals, household spending management, personal saving, and debt management, Citi employees volunteered alongside Kenan trainers to address the looming problem of Thai household debt among some of the most vulnerable populations.

After being introduced to the principles of financial planning at a Kenan workshop, Praphasri took the household accounting notebook home with her and began to apply the lessons to track her spending and habits. She set the goal of building an emergency fund by saving 800 Baht (24 USD) a month, which she hoped to eventually increase to 900 or 1000 Baht ($23 or $30) a month, and studiously recorded her daily earnings and expenditures.

When Praphasri heard that the next round of the financial literacy program would include a contest component and prize for the winning team, she looked to those around her who could also benefit from the knowledge.

“I felt like my money was flying away with the wind!”

Praphasri walked door-to-door in her neighborhood with a mission.

“The hardest part was convincing people to join,” Praphasri recounted. “Three people turned me down, saying that they didn’t think we could win.” In a matter-of-fact voice, she added, “maybe because of my education level.”

In the face of repeated rejections, Praphasri continued to spread the word in her community. Noting people’s hesitance, she explained, “I told them not to worry if they didn’t know anything about household budgeting, because the Kenan staff have a good attitude and will give them the knowledge.”

Through her persistent efforts, Praphasri brought together three more friends and neighbors who were open to learning more about financial literacy and willing to commit to practicing new habits together.

Sasithon Kaenarsa, a 42-year-old cook at Rajhabat University, joined because she worried that her expenses were often higher than her income, especially with her husband’s health condition.

Kwanjai Saithanchit, a 19-year-old first-year student at Ramkhamhaeng University, works to support herself through school. “I wanted to understand why my money felt like it was gone as soon as I received it,” she smiled wryly.

Naree Preawan, a 42-year-old woman who works as a caretaker, exclaimed, “I just felt like my money was flying away with the wind!”

And Praphasri served as the glue holding them all together, checking in on each of their progress and serving as an endless well of encouragement.

“I have high ambitions”

At the financial literacy workshops, trainers from Kenan presented the steps to financial planning: Set a financial goal, clarify your intention, and exercise discipline.

Sasithon’s goal was to save 700 Baht ($21) a month for doctor’s fees to support her husband’s health.

Naree’s goal was to save for her 15-year-old son’s education.

Kwanjai’s goal was to save for her own university tuition and living costs. “I have high ambitions,” said Kwanjai. “I don’t want to bother my family at all for money, I want to take care of everything myself.”

The workshop modeled interactive games off realistic situations for low-income communities, in which unexpected expenses and trade-offs between paying for utilities versus paying for a cell phone plan and other unnecessary items were recognized as a fact of life.

In one activity, teams were given a limited budget and had to discuss how to decide what to buy, debating what constituted a necessary and unnecessary expenditure. In the household accounting book, all expenses must be categorized in one column or the other to encourage reflection on which items one considers a necessity.

Workshop exercises illustrated how small money-saving actions can build up to substantial sums over time, whereas small debts can similarly compound to large amounts over time. Therefore, the continued practice of good habits goes a long way in minimizing debt and building up savings.

Kwanjai, who works nine hours a day and six days a week at a ticket booth to support herself through school, described her change in perspective: “Now, I always think about what I need versus what I want.”

“A course for grassroots people”

It wasn’t easy to build new habits around the workshop lessons, but with the team to cheer each other on, all four began to practice financial discipline to move toward their financial goals.

Praphasri also sent reminders on the instant messaging application “Line” every day, to which the others would sometimes respond with pictures of their filled worksheets.

Three months into the financial literacy program, teams that had kept complete daily household accounting records and followed their financial plans were given cash vouchers to buy necessary items as an incentive to persist in their new habits.

After the workshop, Naree started keeping stacks of five baht coins and putting aside money before it could be spent. She explained that she’d typically have to borrow when it was time to pay her son’s vocational school tuition fees in the past. Eyes gleaming, Naree said, “This time, I told my son, ‘See, now we have the tuition already saved for you.’”

Praphasri recounts that the workshop talked about the importance of having an emergency fund of three month’s living costs. “After I made an emergency fund, my sister-in-law passed away. I was able to give my money for her funeral at the temple.”

“In the beginning of the program, we didn’t understand household budgeting,” said Praphasri. “By the end of the first training, we understood, but had no confidence. After practicing for a few weeks, I felt very lucky to have joined the program.”

Praphasri said, “I’d like to thank Kenan and Citi for making a course for grassroots people with low education and low income. We may be looked down on by the rest of society, but you’ve given us an opportunity.”

“Level of education is not important, but your will is important”

At six months, when the team found out that their efforts had earned them first place in the program, the team’s Line chats were full of celebratory stickers, from bears with confetti to rabbits with big thumbs up.

“This is a once-in-a-lifetime experience for me to win the first place award,” Praphasri laughs. “I’ve never gotten any prize from anyone, so I’m glad and proud of everyone.”

However, their victory was worth more to Praphasri than just the title and prize. Through daily discipline and sacrifice, the team had built new outlooks and new ways of life.

Within the course of a few months, they were able to help their families receive medical care, education and funeral services without falling prey to loan sharks or other predatory services. And, less tangibly, yet just as importantly, they were able to regain a stronger sense of agency and security over their lives.

“Our victory has proven that level of education is not important, but your will is important,” said Praphasri. “Anyone can get first prize, anyone can have savings, anyone can learn.