Ten kilometers from the remains of the once-glistening, gilded temples and palace of Siam’s ancient capital sits Wat Sukhantharam School. A pleasant, green courtyard fronts an otherwise non-descript three-story school building. The school may not look special, but inside Ms. Chalalai Churat, a young, idealistic teacher, is doing something extraordinary; she’s making her 8th graders excited about math. 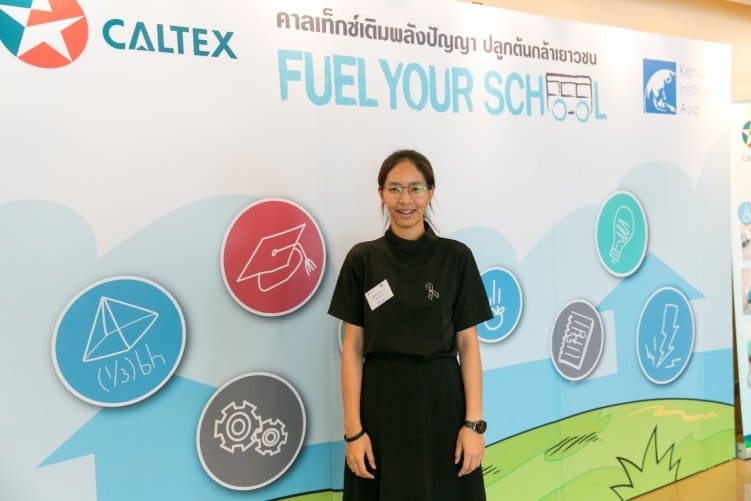 When Ms. Chalalai began teaching, she discovered that her students wanted to learn but lacked belief in their own capacity to do so. It was all too common for her to pose a question and scan the room only to find students dropping their heads to avoid being called upon. On an individual level, she would probe her students and find flashes of potential. It dawned on her that their confidence, not ability, was in short supply.

One year ago, rather than wallowing in frustration, Ms. Chalalai joined Kenan’s Professional Development program, in which she received training on Enhanced Project-based Learning (E-PBL) methodology and was tasked with guiding a student group through a long-term extracurricular project. As she had become accustomed to in her own classroom, the students were hesitant to dedicate themselves to the assignment. Ms. Chalalai, however, insisted that this was no ordinary classroom and the students were totally unconstrained in how they wanted to apply STEM topics.

With Ms. Chalalai’s persistence and their own curiosity, the group gradually began to ask questions, discuss problems, and identify potential solutions. “Math is boring,” was a theme that kept popping up in brainstorming sessions. Ms. Chalalai posed a simple question that lit the flame of their project: how do you make math fun? Turn it into a game, the students responded.

And, thus, “Game of Math” was born. After several iterations, the students developed a game that resembles a mythological Chutes and Ladders in which players answer math equations as they work their way across the board. The game combines the excitement of gameplay with challenging problems that build players’ math knowledge. Inspired by their creation, the group began playing the game with younger students and mentoring them through the most challenging problems. In Ms. Chalalai’s eyes, “Game of Math” exemplifies the pinnacle of education: students actively seeking out knowledge and having fun along the way.

The power of E-PBL arises because the methodology leverages the ingenuity of kids. When students take a leading role in the learning process, they are free to explore, experiment, and grapple with problems that they observe in the world around them. Recognizing the impact E-PBL had on her students, Ms. Chalalai soon adapted the methodology for her own classroom. Today, instead of lecturing entire classes, Ms. Chalalai guides, challenges, and supports groups of students as they investigate math content through open-ended projects.

“I learned several new techniques from the Kenan trainers that do not rely on textbooks,” Ms. Chalalai said. “I have since moved towards a student-centered approach, and I’ve found that my students actually learn more by doing.”

When asked about her students, Ms. Chalalai smiles as wide as the Chao Phraya River. It is obvious that she has a passion for helping students develop the skills and knowledge that will open up the doors to their dreams.