It was not easy for Phan Thai Van to convince the factory manager of Unigen Vietnam to halt production for 90 minutes so that workers and managers could learn about international labor standards. After all, productivity is measured in output, and in short, time is money. 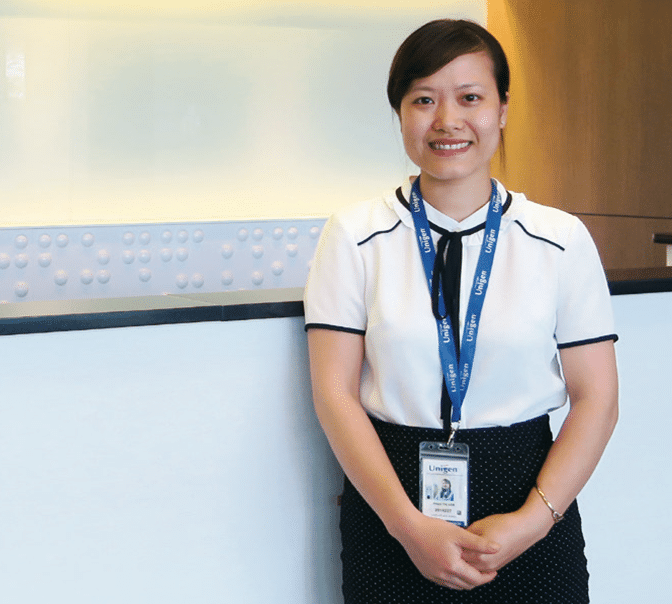 “This is the first project like this that has been organized here,” said Mrs. Van, aged 35, from Ninh Binh. “Factories are driven by production, so it’s a big deal for workers to stop working and join the session.”

However, as the factory’s HR manager, Mrs. Van recognizes that a fair and ethical workplace is essential to Unigen Vietnam’s sustainable growth. Based in the Bac Ninh industrial zone, Mrs. Van seeks to build foundational knowledge about occupational health and safety to foster an ongoing conversation between workers and management regarding issues such as insufficient wages, excessive overtime, and inadequate safety measures.

On a Monday afternoon, instead of reporting to the factory floor, 135 workers filed into a room of long metal tables and got comfortable. Some removed their caps. Before long, shouts and laughter echoed off the walls. As dry as the topic of labor laws can seem, especially to an audience of young workers, trainers utilized creative games to elicit friendly competition among the workers.

Participants competed for small prizes while learning safety and hazard signs workers may encounter around the factory. Animations and videos challenged workers to imagine themselves in dangerous situations workers may find themselves in, such as a fire or accident, and provided interactive space to discuss how best to respond in event of emergencies.

“After the event, I interviewed workers, and all provided positive feedback that the activity allowed workers to learn for themselves how to look after their own safety,” said Mrs. Van.

While the first session focused on building individual knowledge about occupational health and safety, it is the first step of a three-step plan to promote international labor laws in Vietnam.

“There were four main benefits to the workers themselves,” said Mrs. Van. “To apply the knowledge from the training to protect themselves; to have a chance in the way Kenan implements the training to learn teamwork; to learn how to communicate effectively with each other; and to understand better the value they contribute to Unigen Vietnam They also have the chance to win prizes and have fun while learning about an important subject.”

Time is money, but an organization is its people. A fair and ethical workplace that produces informed and satisfied workers will also be a more productive environment where workplace issues are reported and solutions are co-created through dialogue.