One man’s mission to transform his community through financial literacy

Every night before bed, no matter how exhausted, 43-year-old Thammasak Maknakorn sits down and takes out his workbooks for his daily ritual. “In the beginning, it felt tedious,” he says, flipping through dozens of pages, each one filled with the thick handwritten scrawl of daily household and business expenses . “But then I began to see the changes these exercises had on me.”

Thammasak keeps stacks of empty and filled pages neatly in blue waterproof folders tucked under his arm as he walks down the cement road of his neighborhood, greeting neighbors along the way. On the outskirts of Bangkok, the Klong Ladpachee housing cooperative consists of 320 members with 70 houses built with loan assistance from the government urban development agency Community Organizations Development Institute (CODI). 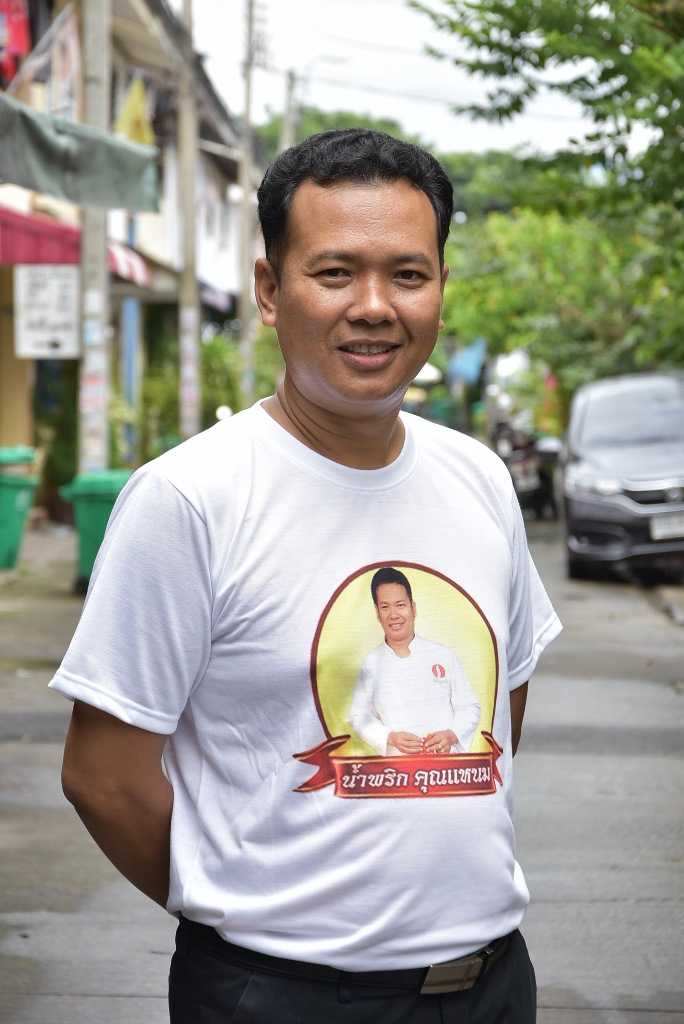 Many residents of Klong Ladpachee are day laborers, street vendors, contractors and other low-wage workers. With small or inconsistent incomes, a slim margin for savings, and little guarantee of a social safety net, just one unexpected accident can plunge a family into debt.

Some move into the community in dire straits after losing their homes. Other residents recount coming up short for bills at the end of a month and having to borrow from loan sharks who exploit their desperation to charge 20 percent interest.

“The loan sharks were always standing in front of the local market,” said Somsri Khamri, a woman in Thammasak’s community. “We began to feel devastated for being born poor.”

For much of Thailand’s laboring classes, financial literacy is a prerequisite for financial freedom. Recognizing this, Kenan Foundation Asia began financial literacy training for some of Bangkok’s most vulnerable communities in October 2016 in a program sponsored by Citi. Having successfully trained 528 community members in the first year of the program, the program has expanded to a target reach of 1,120 trainees in the past year.

While the Thai government runs initiatives prioritizing debt refinancing and forgiveness for certain constituencies, they do not focus on financial education or the kind of long-term behavioral change that gives individuals a sense of agency over their own lives.

After learning and refining his own skills for household and business budgeting, Thammasak grew determined to help his community dig their way out of debt and save for large expenditures such as children’s education and retirement. From the pool of over one thousand participants, Thammasak was one of sixty identified to become financial trainers themselves in order to provide sustained support to their community. He eagerly stepped into the role.

“When I was a child, I was born to a poor family,” Thammasak explains. “Now that I have my own house and my own car, my thoughts are on the community.” His voice swells with emotion. “I want to see everybody happy.”

Page by page, Thammasak has helped bring small victories to himself, his family and his community.

Thammasak admitted that he was skeptical when he first attended a workshop under the Community-Focused Financial Learning and Leadership project, funded by the Citi Foundation and administered by Kenan Foundation Asia.

“To be honest, government agencies had visited us before and told us we needed to write a household budget,” Thammasak said. “They had good intentions, but they were very dry.”

“Kenan taught us in a different way. Real-life situations like the ones presented in the ‘happy family game’ helped us see the applications of our learning. And then Kenan came back and checked: Did we actually increase our savings?”

The first goal Thammasak set at the workshop was to afford the 180,000 baht down payment on a car. Thammasak pointed to the proof of his success — in a cement driveway, a white Isuzu with a Buddha sitting cross-legged on the dashboard came into view. A golden pendant of the king dangles from the rear-view mirror in a flurry of pink ribbons.

As the manager of business operations for the community’s chili sauce cooperative, Thammasak uses the car to distribute their products to broader markets and customers, expanding the reach of their sales.

When business earnings fall short, Thammasak borrows from his personal account and tracks the loan in both his personal and business books in order to pay himself back. Accounting practices have clarified their cooperative’s ability to reinvest profits into growing and streamlining the business.

One such investment is a small facility down the road to house the industrial machinery purchased by the cooperative to dry and crush the chilies, which saves time and manpower as well as improves hygiene, since the products are now processed indoors.

The next goal is to save for Thammasak and his wife’s retirement: 3.6 million baht over 12 years, which they have calculated amounts to 25,000 baht a month.

Thammasak bursts into laughter, a playful sparkle in his eye. “I even had a small argument with my wife the other day. I said, ‘Why didn’t you write down your expenses yesterday? You need to know what you’re spending!’” In a serious voice, he added, “It’s become a habit. I don’t want to waste anything.”

While Thammasak and his wife once spent 6,000 baht on lottery tickets per month, the workbook forced them to categorize items in one of two columns: necessary or unnecessary expenditures. “It made us think about what we really needed.” The couple agreed to reduce their spending on lottery tickets.

“When I see my money increase from month to month, I feel happy,” Thammasak said. “It stimulates me to want to see it increase again and again.”

Having tasted the fruits of the exercises in his own life, Thammasak was determined to share his financial literacy skills with the community. “Instead of giving material things to others, I am giving knowledge,” Thammasak said. Three women in his community shared with Thammasak their situations, financial goals, and small triumphs.